I am ordinarily comfortable chatting with my fellow air passengers. On this flight I was apprehensive.  It was November 12th 2016, just days after world news proclaimed our President-elect would be Donald Trump, and I was flying out of Mexico.

I honestly didn’t know what to expect.   While I am very good at imagining the absolute worst scenario for any given circumstance, and my inner-pessimist had been licensed for wild creativity on this day, I was decidedly uneasy accepting the fact that I truthfully had no notion of what might transpire.

As I self-consciously inserted myself into my aisle seat, silently vowing to again return to a consistent exercise regimen, my window-seated neighbor introduced himself.   Felix Ortiz could not be a more unassuming, relaxed and polite fellow passenger.   I could not have been more physically uptight and socially awkward.

We exchanged the usual pleasantries, each of us explaining why we were leaving Oaxaca Mexico now. Felix is from Oaxaca but lives and works in the Philadelphia area.  His wife and children were visiting Disneyland in Florida. I had spent a tremendous week in Oaxaca.  I desperately hope to return to Oaxaca before long.

Then it happened.  It began with a simple statement.

“So, about your wall… “, Felix began. I interrupted precisely the way I had rehearsed it through the sleepless nights since Tuesday, “Oh hey, I heard about that….  Yeah, that started in 2006 and ran out of funds and…”   Felix waited for me to pause and then offered, “We have a lot of jokes about the wall.   Would you like to hear some of them?”

I could only nod.  Felix smiled, probably because my shock was palpable.

“We will bid for the contract to build the wall” he said, “our construction is impeccable.  Also,  a value-added benefit is the modern features we will incorporate…like revolving doors, escalators,  a slip-and-slide…  a tunnel…”

“We have stipulations for this wall,” Felix continued, “we get to pick the colors on our side.   You U.S. Americans don’t do so well in choosing colors.  Beige!  Everything you build is beige!  No, if we have to look at it every day,  it must be beautiful Mexican architecture!”

He had a few more.   I wish I had written them all down the moment I walked into the terminal.  More than that,  I wish I had not lost my sense of humor.

I had not known at that time was that when Trump announced his visit,  Mexico City’s Museum of Memory and Tolerance –  host to  exhibits on the Holocaust and the US Civil Rights Movement – offered Trump free admission.

Since my conversation on that flight I discovered pundits have offered a plan for the wall based upon the historical boundaries of New Spain,  the Spanish territory in the New World – established after the Spanish conquest of the Aztec Empire in 1521.

The blue line: “The wall of Donald Trump”

In the bottom it says “We gladly send the plans and don’t worry, we’ll pay for the build. When will you be moving out so construction can begin?” 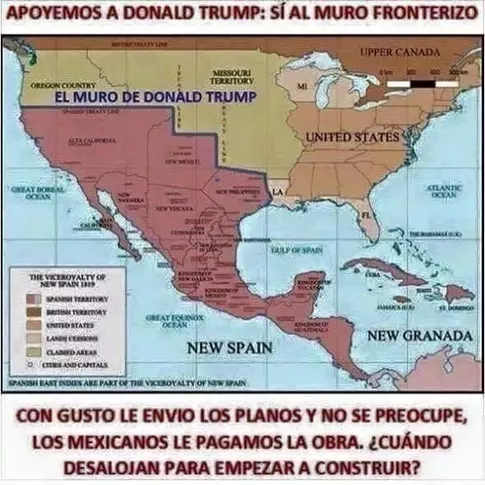